Last night, in a conversation regarding the economy and fiscal policy, I was asked, “What would happen if the United States stopped paying for welfare programs?” I responded that people would die. But the question asked—though a stark and cold one—is a good one. The inquirer was concerned that the money spent by the United States on social welfare programs could be better directed by individual; he was curious whether taking the money that funds those programs and returning it to the tax payers that earned them would result in more jobs. 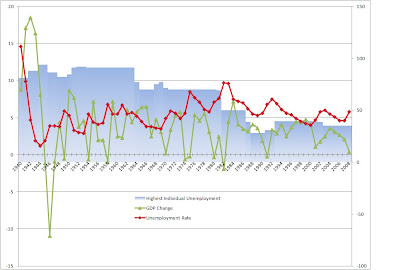 Turning now to an actual welfare program, when asked about cutting social welfare I immediately thought of WIC. So, what would happen were WIC eliminated? In 2007, WIC cost the federal government $5.4 billion. Also in 2007, 1.1 million tax returns were filed at the highest individual rate (35%). Now, distributing the cost of WIC over the income tax brackets at the same proportion it was taxed, and dividing those values by the number of returns filed in that bracket tells us that by eliminating WIC, each of the 1.1 million filers in the highest tax bracket would have saved $577.49, or 2/10 of a percent of the lowest earner captured by the 35% bracket. On the other hand, WIC service 8.3 million pregnant women and infant mothers.

This program of bringing insurgents into the fold by offering them employment tacks closely with US programs in Anbar--there, US construction contracts were awarded to the tribes that composed the Anbar Awakening Council. It also follows closely the tenets of COIN. Employing military-age men simultaneously drains the surplus of idle, aggressive young men and provides those young men with an alternative means to support their families beyond taking $20 to plant a roadside bomb.

The sorts of abuse reported in today's Washington Post, however, undercut US efforts in Afghanistan. Curtailing detainee abuse is--and ought to be--one of the highest US policy objectives.
Posted by Ben at 8:18 AM No comments:

The Sons of Afghanistan

In September of 2006, as the Sons of Iraq—the so-called Anbar Awakening—began to emerge in Al Anbar province. At that time, one of the leaders improbably boasted that after they defeated Al Qaeda in Iraq, they would go to Afghanistan and defeat Al-Qaeda there. And so they have . . . after a fashion.

As the Awakening Councils gained momentum in the spring of 2007, I wrote that, while the Sons of Iraq were clearly serving a useful end, the emergence of an armed group not necessarily loyal to the State—and one the Shiite central government clearly feared—could be dangerous. My fear then was that if the Iraqi central government did not achieve some sort of condominium with the Sons of Iraq, Iraq would eventually witness another round of sectarian violence, this time between two entities armed and supported by the United States. Fortunately, the Iraqi Central Government and the Sons of Iraq have been able to work together, and the civil war has not be renewed.

Afghan Awakening Councils do not present the same threat of civil war. However, building any armed power structure outside of the State is inherently dangerous. That said, in the case of Afghanistan, devolving power to the tribes may be the appropriate solution to the vexing problem of how to stabilize Afghanistan.

I have, in the past, drawn parallels between Somalia and Afghanistan—the threat their respective instabilities pose to US national security. Somalia, as strange as it may sound, may possess an example of the utility of devolving power to traditional tribal structures: Somaliland. Somaliland is a stable, self-governing, and democratic entity in northern Somalia. Its success may be attributable to the indigenous, tribal-based reconciliation process it underwent in the early 1990s—a reconciliation process that was successful in marked contrast to the constant, on-going failure of externally grafted reconciliation processes in rump Somalia.

All of the above is to suggest that a widespread tribal uprising, supported by the United States, will not in the near-term result in a strong, central government. However, unlike the corrupt Karzai regime, grafted on Afghanistan from outside forces, the indigenous tribal structures may actually be able to police their individual domains, and extend necessary stability throughout Afghanistan.

Of course, the twin difficulties of convincing the Pashtun tribes to abandon the Taliban, and of convincing the tribes that have taken up arms against the Taliban not to later turn those arms on even a weak Afghan state remain. That said, US support for the tribal militias represents a heartening step towards pursuing a coherent strategy that both reflects Afghan realities and is responsive to real US national security needs.
Posted by Ben at 9:37 AM No comments:

Several months ago I wrote about Sarah Palin and the myth making surrounding her. At the time, Time Magazine labeled her a Renegade and featured her visage on its cover. Now that Ms. Palin has released her book, "Going Rogue," it seems appropriate to revisit the matter. Palin is not a rogue. Instead, Palin is a rather mundane charlatan, affecting a folksy, populist manner for base (pun-intended) appeal.

David Bowie, an English professor specializing in linguistics at the same university, said Palin didn't use so many informalities before she ran for national office.

"She doesn't sound like that when she's speaking to Alaskans," Bowie said.

Secretary of State Clinton appeared on This Week with George Stephanopoulos yesterday to discuss the Afghan strategy review. It is clear that Secretary Clinton understands the role the United States should play in Afghanistan:

But we have no illusions. This is not the prior days when people would come on your show and talk about how we were going to help the Afghans build a modern democracy and build a more functioning state and do all these wonderful things. That could happen but our primary focus is on the security of the United States of America. How do we protect and defend against future attacks. We do not want to see Afghanistan return to being a safe haven and a staging platform for terrorism as it was before. That is what is driving the President to make the best decision he can make.

Hopefully, Sec. Clinton’s remarks yesterday represent the emerging consensus within the administration.
Posted by Ben at 3:42 PM No comments:

CBS reported yesterday that President Obama has settled on a deployment of nearly all of the 40,000 requested by Gen. McChyrstal (McChrystal’s request for additional troops included 3 options: 10,000; 40,000; or 80,000 troops). The Obama administration has denied the report.

At the same time, the AP reports that NATO expects to deploy additional troops to Afghanistan with a view towards increasing the number of advisors tasked with training Afghan security forces. The limited ability of the Afghan security forces has gained more attention of late as questions of the purpose of NATO’s deployment have increased with talk of sending additional troops. These questions have only been exacerbated by the Afghan election and subsequent runoff debacle.

Finally, McClatchy reports that the price of food has spiked across Afghanistan following the UN’s decision to remove international aid workers in response to last week’s bombing.

The UN’s move is understandable but it could not have come at a worse time. If the Obama administration is planning to increase troop deployments, as CBS reported, then the US is committing itself to a more robust counterinsurgency strategy. At least, that is what the move should auger, assuming that the Obama administration has done the necessary predicate work to arriving at that decision—namely, determining the purpose of US involvement in Afghanistan, a goal (or endgame) and a broader strategic vision for the region and US national security. But, as has been discussed in this space at length, counterinsurgency requires more than additional troops. It requires stability, both through added security (troops) and economically—pulling foreign aid workers from the country, causing food prices to increase dramatically at the outset of winter, is as damaging as providing the Afghan Taliban with weapons and ammunition, perhaps more so.

Of course, the United States cannot dictate the UN’s deployment of aid and aid workers. And, while the deployment of aid under UN aegis arguably ensures a measure of protection for aid workers, the disaggregation of aid from security likely is at cross-purposes with NATO goals. Perhaps, at long last, it is time for the United States to reconsider its anemic reconstruction effort. A more robust, integrated reconstruction and civil society development effort that mirrors the military component in size, resources, and command-and-control may be a better solution.

The Caucus Blog over at the New York Times gives an overview of post-mortems following Tuesday's elections. One aspect of Tuesday’s election loss in Virginia likely to be overlooked is the quality of the Democratic field program. Ignoring Virginia’s organizational failings, however, will prove disastrous for the Democratic Party over the long-term.

To be sure, there are many factors that played a significant role in Deeds’ defeat. He was a poor candidate from the outset; the political climate works against democrats—the ongoing wars in Iraq and Afghanistan, a persistent recession only showing signs of improvement very recently, the drawn-out and unrealized healthcare reform process—and a hangover from the long 2008 presidential campaign.

Organizationally, however, the Virginia Coordinate campaign represents an epic failure of leadership. Following the Virginia Democratic Primary, many of the senior field positions were filled by veterans of the Obama for America campaign. These individuals, by virtue of their sweeping success in the 2008 presidential and primary campaigns, had excellent claims to these roles. However, their involvement with the Obama for America campaign was not necessarily indicative of their personal abilities. Indeed, the electric quality of their candidate, President Obama, deprived them of the challenges familiar to organizers in the past—challenges that teach organizers how to organize and separate those that are able to build effective machines and those that are not.
Posted by Ben at 9:06 AM No comments:

You Ought To Read: